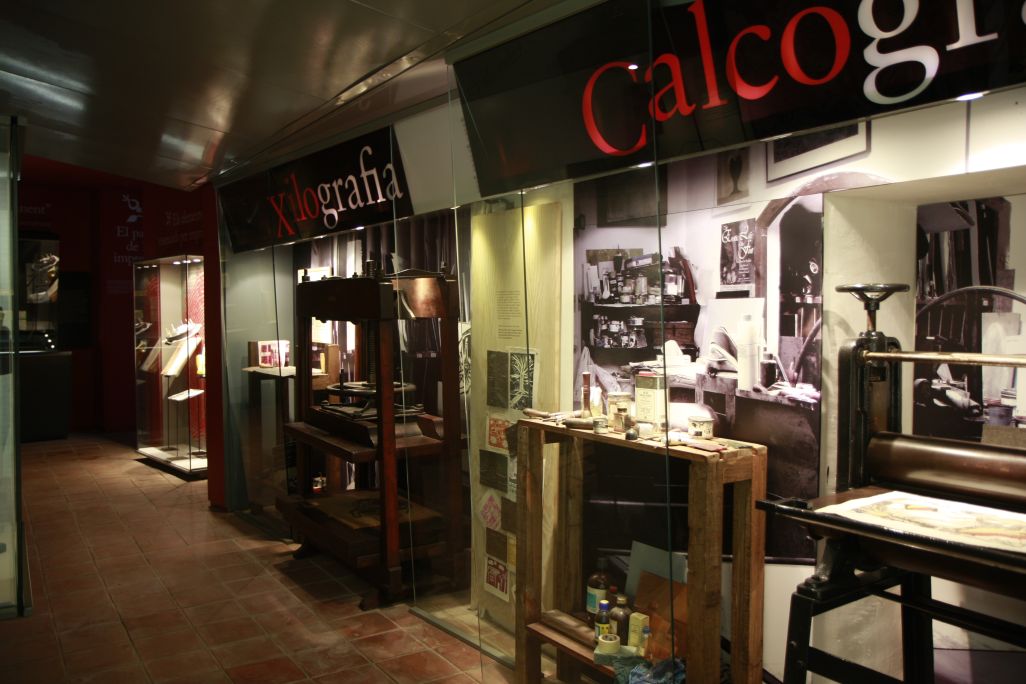 Rolling or chalcography press. Grouped under the name of chalcography are all incision techniques on metal which aim to reproduce, convert and create prints from drawings. Capellades Paper Mill Museum.

Chalcographic incision consisted of etching a drawing on a plate of copper, zinc or steel. The plate can be worked on directly (burin, drypoint, etc.) or else indirectly through the action of corrosive acids (nitric acid, aquatint, etc.). The engraved drawing obtained is covered in ink. The ink is deposited in the grooves produced by the instruments or acids with the objective of then transferring the image from the plate to paper. The heavy pressure of the press allows a test print to be done.

The first metal etchings were made using the burin in the 15th century, and in the 16th century nitric acid was developed as an alternative to the woodcut, as the use of metal instead of wood ensured a higher level of durability for the edition.

Burin engraving: The plate is incised with a burin or sharp instrument. The engraver has to maintain a balance between the pressure of their hand which propels the burin and the movement of the other hand on the plate in order to have complete control of the hollowing out of the drawing or the incision.

Drypoint etching: Etching the plate with a steel tip produces grooves with burrs on the sides which give a velvety appearance. The name of this technique comes from the name of the tool which is used to incise the plate.

Nitric Acid engraving: A series of incision techniques in which acid or chemical solutions are used to engrave the plates. The incision is achieved by the action of the acid or mordant, so the engraver must be very skilful in order to control the effect of the acid on the plate, ensuring that the incision or engraved drawing is not destroyed.

Aquatint engraving: This is a process used from the 17th century onwards using nitric acid to imitate the values ​​of chiaroscuro painting. The technique allows the artist to achieve gradual tones and shades. This procedure is also used for the sugar technique.

Artists who have used the chalcographic press