The variety of techniques with needle and bobbin: netting, embroidery and lace 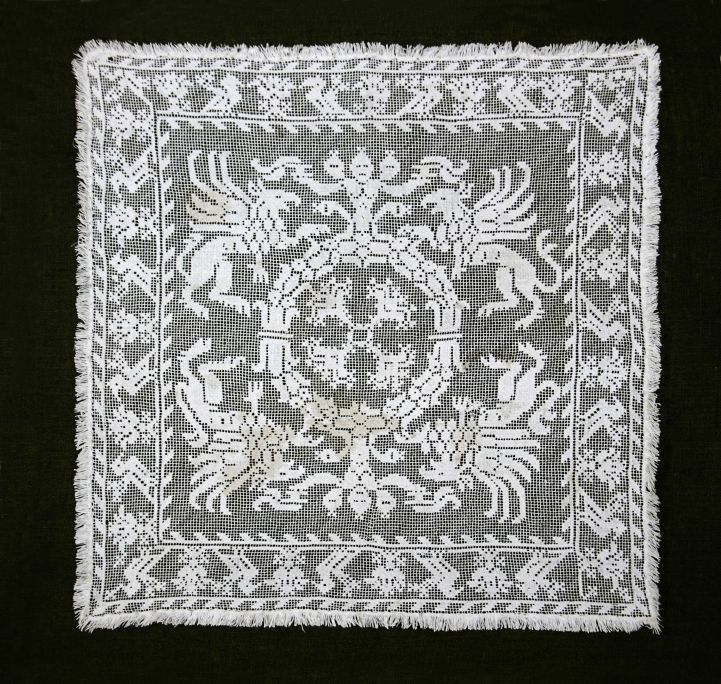 For some historians mesh works are considered the oldest samples of lace work. During the 15th and 16th century they were very popular in Spain and Italy. The base was always a net or a mesh placed on the rack and then embroidered. Technically the mesh fabric is a thread where knots are made by passing the same thread through the open spaces of the mesh. In this room we can see the Frederic Marès i Deulovol collection from Castile, 16th and 18th century. Mostly there are elements of household furnishing on display, forming a rich iconography: fantastic animals, cavalry scenes, religious scenes. Among the frontal pieces, our attention is drawn to the Renaissance and late Medieval style of iconography. Some of them of a clear oriental influence, however, we can also find motives from the 18th and 19th century. An important part of these frontal pieces is in their geometrical character. However, without a doubt, the most interesting are the ones with the imaginary animals: dragons, crowned dogs and confronted lions. We can also see the motive of a lady which is being repeated in different pieces. It consists of a woman with a hat and a triangular dress reminiscent of an Oriental Goddess. Among the examples of Asian-inspired floral elements, there is one flower made of eight petals and of a triangular shape which some of the authors classified as an Assyrian Rose.

The examples displayed in the glass case are laces made with a needle or bobbin and some embroidery work. Needle lace is made using a cushion where a paper pattern is placed and which formerly was done on a piece of parchment. The lace makers work firstly the separate motifs and then join them together

with flanges or tulle. The first needle laces were created in Venetia in the 16th century: “la reticcela” o “el punto in aria”. The Venetian lacemakers moved in the first half of 17th century to France were they taught their techniques to the French lacemakers. In France the following styles were developed: Agentan, Sedan and Alençon. But the most known are the Belgian chiffon laces that were developed in Belgium in the second half of 19th century.The lace from Tenerife is also made using a needle but the technique is very different. Its making is based on circular forms. In Andalusia there is another type of needle laces, which is embroidery on tulle - called grenadine. The lace made with bobbins were firstly developed in Flanders in the late 16th century. They quickly evolved from thick and dense motifs (18th century) to more airy designs (19th century). The bobbin lace is created by using various bobbins with yarns, and by criss-crossing. From the very basic techniques like numeric, torchón and Guipur to other very complex ones, different cities in Europe developed their own styles based on various tastes and fashions of that time. Vallenciennes and Malines in France, Binche and Duquesa in Belgium, Honiton in the United Kingdom or the lace from Milan and Genoa in Italy. From the 19th century the industrialization and mechanization brought the mechanical tulle lace. In Spain they were called the appliqués laces, popularly known as the English lace. An application was placed on a mechanical tulle using a needle or a bobbin. Silk, cotton and linen materials were generally used for the lace making. But there are also laces made with metallic threads: gold and silver. They were mostly used for religious elements of ecclesiastical regalia. Guipure lace is also known as the Spanish lace since, according to some of the authors, they were purchased in large quantities in this country. 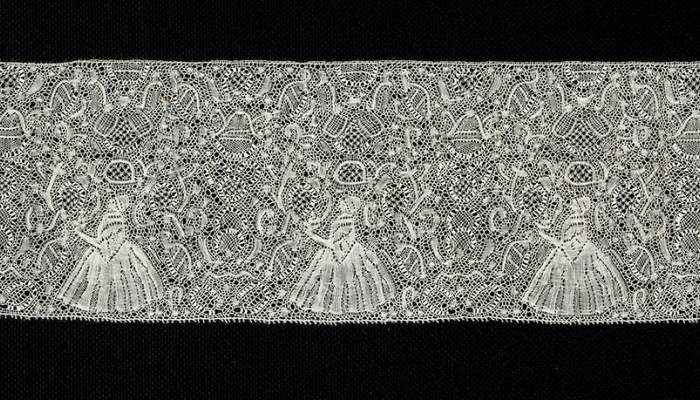