Nigra sum (iconography of the Virgin of Montserrat)

This space contains a highly varied sample of art and popular items that explain the iconographic evolution of the holy image and how it is captured in different works. Even though the works displayed are just a small portion of those at the abbey, they allow us to see the timespan, size and universality of the devotion to “La Moreneta”, the nickname of the Virgin of Montserrat, who in 1881 was proclaimed the patron saint of Catalonia. This is the source of the interplay between the Catalan national emblem (the four red stripes on a gold background) with the emblem of Montserrat (the mountains with a saw above a prominent peak).

Placing all the materials in a single space which can be seen all at once makes it easier to discern the common features and the iconographic variations in how the image is represented. It has the added educational value of showing how a single image can reflect the variation in tastes and artistic styles over the centuries.

The image of the Virgin of Montserrat is made of polychrome and gilded wood. It measures 92.2 cm tall and weighs 17.1 kg. It was carved in the late 12th century and bears many stylistic and sartorial similarities with other images venerated in the old Benedictine monasteries. 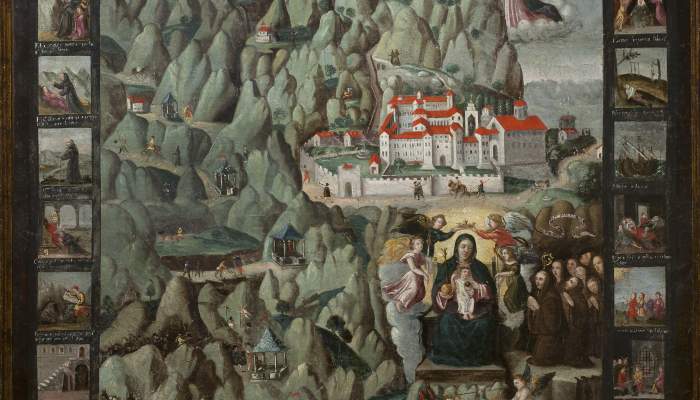