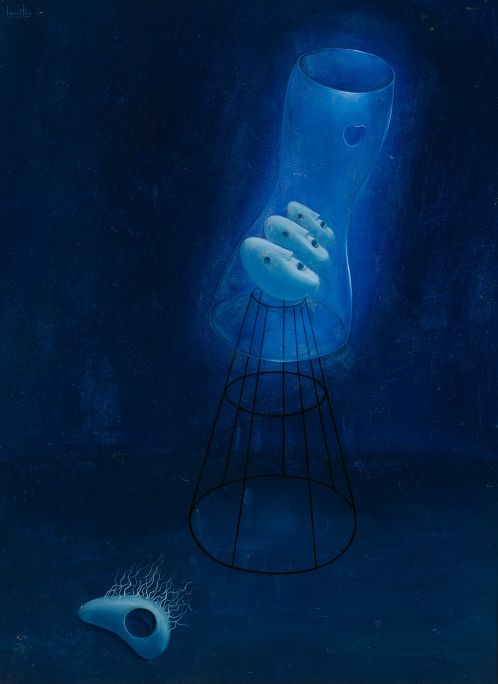 Lamolla (Barcelona, 1910 – Dreux, France, 1981) was the leading exponent of Surrealism in Lleida in the 1930s. His work was soon recognised in avant-garde circles and was shown in important exhibitions in Madrid, Santa Cruz de Tenerife, Paris and Barcelona. It was in Barcelona that he participated in the Logicofobista exhibition, the most important collective exhibition for Spanish Surrealism.

L’espectre de les tres gràcies dins l’aura subtil (The Spectre of the Three Graces in a Subtle Aura), considered to be one of his most successful works, is inspired by the classical myth of the Charites, or Three Graces. Lamolla thereby joined the ranks of many artists who had also dealt with this theme in their work, but he radically subverted it by replacing the figurative with the spectral, the three Graces being represented by white masks on a simple cage crinoline inside the lower part of a transparent conical corset. What unifies this hallucinatory and spectral vision is the subtle use of a refined range of blues, something that would become a distinctive feature of his work.