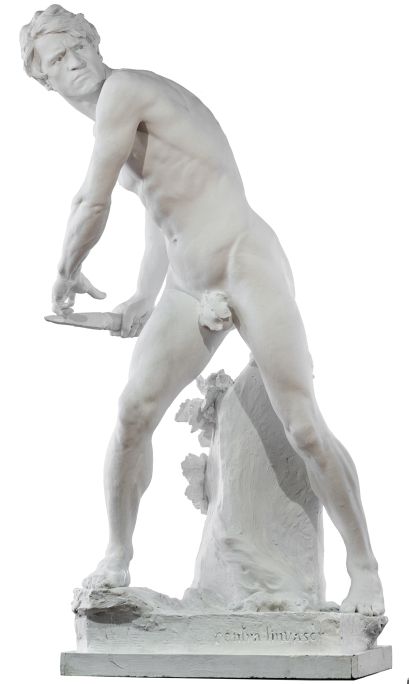 Against the Invader is one of the best-known works of Miquel Blay, a sculptor from Olot and one of the leading figures of Catalan modernisme. Blay carried out the work in 1891, at the age of 25, as the final exercise of his studies in Paris, where he attended through a scholarship granted by the Girona Provincial Council. The sculpture, modelled in plaster and inspired by Bernini's David, depicts a fighter standing, unclothed, brandishing a lance in a defensive pose. It was intended to symbolise the heroism of the people of Girona during the Napoleonic siege, but today the work has become an icon of the struggle and resistance of the city in all epochs.

Years later, the sculpture inspired an article by the writer Carles Rahola that he published with the same title in 1938, at the height of the Spanish Civil War. The text, along with other articles, resulted in him being charged with military rebellion and condemned to death.