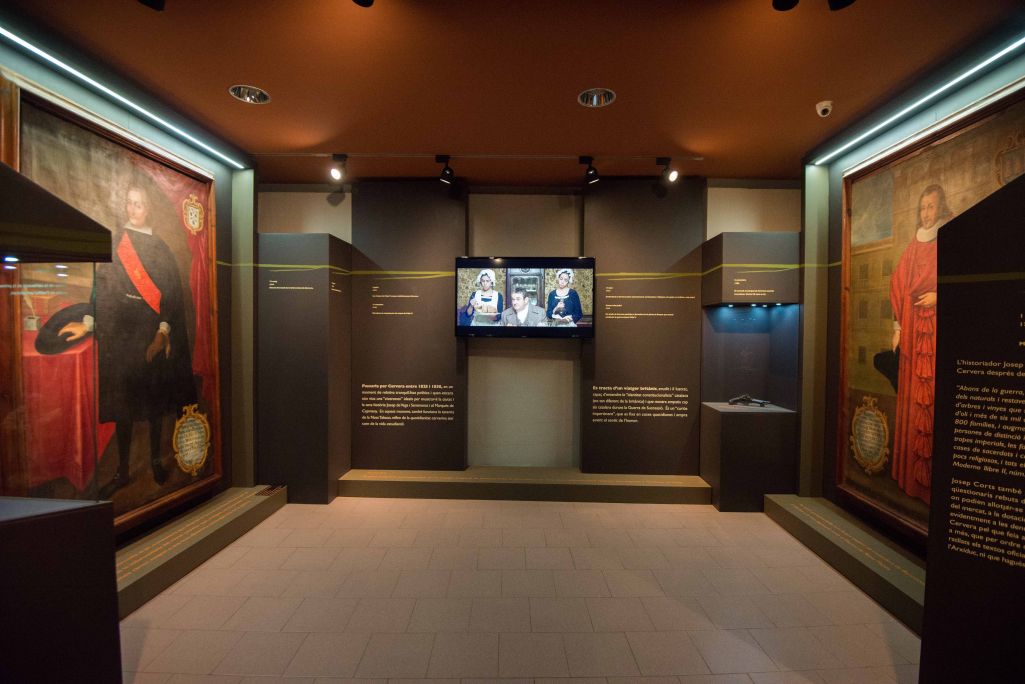 View of the permanent exhibition with a detail of the Cervera 1700 room. Photo by Jordi Prat. MCC.

The history of Cervera after the year 1700 has been marked by two transcendental facts, one the consequence of the first, which has a relevance that goes beyond the area of the city: the War of Succession and the posterior creation of the university.

If we want to get close to this reality we would propose a journey back in time to the Cervera 1700 exhibition, being put on at the Museu Comarcal de Cervera (Cervera County Museum) and also to the “Universio” exhibition, being held in the Auditorium of the Universitat de Cervera (University of Cervera).

This space takes the spectator back to the historical context of the Cervera of 1700. Through four selected objects and a chronological trip through the most important events you will learn about the role played by Cervera in the military conflict and the consequences of the promulgation of the Decree of Foundation of the University of Cervera, which was the unique Catalan University of that time.

The exhibition is round off by the short film “Camí Ral” (Highroad), situated in 1825.It is about an English traveler full of curiosity and keen to learn about the University and the city of Cervera.

Finally, if you go to the University you will be able to see the exhibition “Universio”, which shows the impressive collections from the old University. It is a trip which brings to life the university and the workings of the academics in the institution: from the gowns worn by the professors, to the liturgy of the festivals in the university, the calendar of classes and the degrees the university awarded. Watching over all this, there is the monumental image of the “Immaculate Virgin Mary”, patron saint of the University, at the head of the baroque altarpiece of the Auditorium.